Retail automation is a big part of the industry today, and companies are always on the lookout for ways to introduce new technology to the day-to-day operations of their business. Simbe Robots is following this trend with its innovative stock-taking robot.

Simbe Robotics was founded in 2014 in San Francisco, California, by Pennsylvania State computer science alumni Bradley Bogolea and Mirza Shah. With a strong focus on building exciting automation solutions for the retail industry, Simbe Robotics is at the very fore of robotics technology. Backed by leading hardware venture fund Lemnos Labs and startup accelerator veteran of 20 years SOSV, Simbe Robotics is ideally positioned to provide severe disruption to the world of retail.

Retail has its fair share of mundane tasks which must be completed by its hard-working employees, and indeed it's the very mundanity of these tasks which makes them ripe for automation.

The first of retail's issues which Simbe Robotics has chosen to target is that of auditing shelf stock. The business of stock-taking is boring, inconvenient, time- and labor-intensive, and prone to error. It's estimated that global retailers lose around $634.1 billion dollars per year in missed sales opportunities arising from out of stock items, empty shelves, and other inconsistencies in-store. 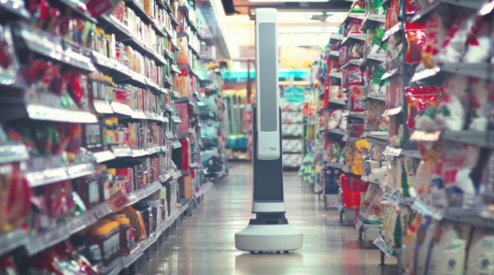 It is with these inadequacies in mind that Simbe set to work on its first robot and has now unleashed Tally on the retail industry.

"Retailers are rarely able to do item-level counting," said Brad Bogolea, CEO and Co-founder of Simbe Robotics. "The only time inventory is checked at that level is when it passes through a checkout counter, or a manager tasks an employee with walking around with a [radio-frequency] gun. Tally solves this problem by instantly providing businesses with the appropriate data to help said businesses make better financial decisions."

Standing at 38 inches tall and weighing in at around 30lbs, Tally is an adorable machine which somewhat resembles and upright vacuum cleaner. With a pair of blinking eyes on its digital display serving to anthropomorphize the droid, Tally travels around a store scanning the shelves for issues such as low stock, pricing errors and more. The data it collects is then fed back to a tablet device, in real-time, so that human staff can be dispatched to address the problem.

Tally carries out its task by comparing the photos it takes of the shelves with pre-loaded 'ideal' images in its memory. Where it spots discrepancies, it flags the shelf for attention - working very much like an android-powered spot-the-difference puzzle.

Tally is designed to complete shelf audits faster and more accurately than its human colleagues, with Simbe Robotics claiming the robot can scan a small-to-medium-sized grocery store (a task which could take a person an entire shift) in just 30-40 minutes. Tally can check 15,000 to 20,000 products per hour across shelves up to eight feet high.

Stores that stock goods on shelves with easily-viewed barcodes and prices are the best fit for Tally. Tally can work in the frozen goods section of a grocery store provided there isn't heavy condensation on the freezer doors, or a strong glare from overhead lights, which can reduce the acuity of the robot's sensors.

The bot was originally considered for the healthcare and hospitality industries before Simbe Robotics settled on retail, so the potential for other applications of the technology are broad.

Simbe Robotics has taken an age-old retail problem and solved it with an elegant and innovative machine. Tally may not be perfect yet, but it's already better and faster at shelf auditing than its human colleagues - and it is only likely to improve as retail automation technology develops.

The final word goes to Brad Bogolea. "The goal of Tally is to create more of a feedback mechanism. Although most retailers have good supply chain intelligence, and point-of-sale data on what they've sold, what's challenging for retailers is understanding the true state of merchandise on shelves. Everyone sees value in higher quality, and more frequent information across the entire value chain."

Retail automation is set to be a hot topic at Future Stores West 2018 this June at the Sheraton Seattle, WA.