Augmented reality has been hitting headlines for some time now. However, innovative tech startup Rattle is bringing the technology to some wild new frontiers.

Rattle was founded in 2015 by technology veterans David McDonald and Adrian Firth. McDonald has over 25 years' experience working in a range of digital media, technology, and entertainment companies, while Firth has a background in digital art and design, going back over ten years. Rattle specializes in creating interactive experiences, with a focus on outdoor digital solutions, live exhibitions, events, and point-of-sale innovations for digital retail. It has an ethos of always using the best technology for the job, rather than (necessarily) the most recent.

Today, Rattle runs as a collaborative effort with tech innovators all over the world. McDonald and Firth are the only two permanent members of staff, but thanks to the latest in modern collaboration tools, their team is rapidly expanding to every corner of the globe.

Rattle has hit the ground running and already has several of its augmented reality innovations in the marketplace, working with some of the world's biggest brands. 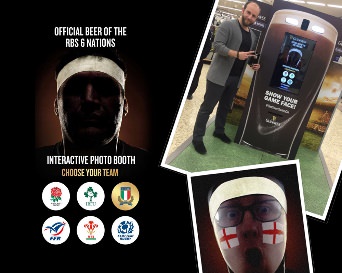 As part of their promotional efforts for the 2018 Six Nations rugby tournament in the United Kingdom, Dublin-based drinks manufacturer Guinness teamed up with British supermarket chain Tesco. To help promote the brands' association with the competition, they wanted a cost-effective interactive experience which would appeal to fans of Rugby and Guinness and inspire customer engagement.

In answer to this call, Rattle designed a photo booth in the style of Guinness's iconic pint glass. Within the booth, rugby fans could "show their game face!!" by capturing their image and overlaying it onto a separate image of a beefy rugby player, and then apply virtual face paint featuring the flag of their home nation. The pictures could be printed out and shared with a special #GetYourGameOn hashtag.

"As part of the promotions campaign for the Six Nations rugby competition, Guinness's PR agency N20 asked us to create an interactive experience that would prove highly engaging to Tesco shoppers, whilst proving to be a cost-effective solution for the brand," said Rattle in a press release. "The installation featured a Guinness-branded interface designed by us and an option for users to print out a screen capture. The photo booth toured several Tesco stores around the UK over the period of the Six Nations championship and tackled tight budgets and tough deadlines with aplomb."

Another great project for the talented people at Rattle came when communications giant O2 were looking for a way to promote the latest much-anticipated installment in the Star Wars movie franchise - The Last Jedi.

The result was an enormous interactive mirror, which gave shoppers at London's Westfield Shopping center the chance to see what they would look like as one on the series' iconic Jedi warriors. Sporting dark cloaks and brandishing lightsabers, the images were displayed on the giant screen for all to see, and offered plenty of opportunity for pictures and social media sharing.

"Using an 'interactive mirror' concept, we gave people the chance to become a Jedi - live on a giant digital screen," said Rattle. "Working against all the odds due to a tight deadline, we combined complex technology and traditional film production techniques. With greenscreen filming using facial markers, plus careful post production and bespoke software creation to help control positioning, shading and lighting, we were able to seamlessly integrate the final result with Ocean's outdoor network."

Rattle is off to a great start with its innovative augmented reality marketing designs. It has worked with several other big brands apart from O2 and Guinness, including J20, Virgin Media, Emeji, T-Mobile, and Pepsi, and has its sights set on many more in the future.

The final word goes to Rattle's own mission statement. "Using modern collaboration tools, we are able to bring together some of the world's most talented folk to work on any one project. From street art to high art, and Grammy winners to PHD quantum physicists (yes, really!), we can pull a hit squad together for almost any project and take pride in the fact that we always deliver and are acutely aware that we're only as good as our last project."

Augmented reality is set to be a hot topic at Future Stores West 2018 taking place this June at the Sheraton Seattle, WA.