How Flirtey is Trailblazing Drone Delivery Services in the U.S.

Drone delivery services have been in the pipeline for some big brands such as Amazon and Food Panda for a while now. However, tech startup, Flirtey, is looking to disrupt those proprietary services by offering an independent drone delivery option.

Flirtey was founded by Matthew Sweeny, Ahmed Haider, and Tom Bass in Australia, in 2013. The following year the fledgling company made a partnership with the US-based University of Nevada and relocated to the area. The company has raised $16 million in series A funding to date, on top of initial seed funding of $120,000 it raised while participating in the Y Combinator accelerator project.

Today, the company has one of its drones on display in the Smithsonian's National Air and Space Museum, and is looking to expand its service to new markets in every corner of the globe.

Also, in 2016, Flirtey completed the United States' first ever ship to shore delivery in collaboration with the John Hopkins School of Medicine. The company has delivered everything from Dominos pizzas and 7/11 Slurpees to life-saving medical supplies. 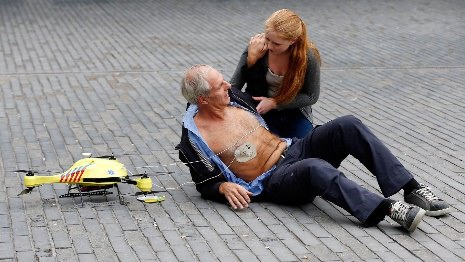 The company's drone was designed with reliability and safety as priorities. Its flagship UAV [unmanned aerial vehicle] is a hexacopter that can continue to fly even if one of its six motors is taken out of action. It has two batteries, and can run on just one if necessary. The drone lowers a payload in a box from about 50 feet over a customer's doorstep or other designated delivery area. If a would-be drone thief attempts to pull it down by the line, the drone detaches and safely flies away.

Drone delivery services are a regulatory nightmare to establish, so to see Flirtey making such good ground after only a few years in business is impressive.

While it may seem at first glance that Amazon's own foray into drone delivery should be cause for concern for smaller companies such as Flirtey, it is more likely it will offer a net benefit result to independent endeavors. If Amazon succeeds in popularizing drone delivery, it will become a market creator. Other companies will then feel they have to also offer the service to remain competitive, and will likely turn to third-party companies such as Flirtey to provide it.

There is already competition from other independent drone delivery companies, but a competitive marketplace only serves to drive innovation - after all, there are few things more stagnating than a monopoly. Flirtey's ambitions in the medical delivery space have particularly wide-reaching consequences.

"Based on our analysis and historical data, just one of our drones carrying AEDs and operating in an area with the population density of Reno will save one life every two weeks," said Sweeny. "We can set a precedent here in Reno and expand that across the country. For many of us, it seems logical, and inevitable, that our skies will eventually be filled with drones serving all kinds of commercial and public safety purposes."

Drone delivery services are an exciting new avenue for not only the retail ecommerce industry, but also medicine, food and drink, aid, and many other markets as well. Flirtey is clearly a trailblazer in the field, and looks to keep its momentum going as we fly into the future.

The final word goes to Matthew Sweeny. "Seeing a Flirtey drone delivering an AED will be as common as seeing an ambulance on the road."

Drone delivery is set to be a hot topic at Future Stores West 2018 this June at the Sheraton Seattle, WA.